These are a few of my…

It’s just about Christmas, and most of us are looking forward to some quality family time around the tree, maybe at church, and possibly at the dinner table.

It sounds as if we’ll be enjoying one of those spiral-cut hams here at the Matile Manse on Christmas Day. No Christmas goose for this family, Uncle Scrooge. We tried doing goose for Christmas back in the 1970s and both times we were so sick with the respiratory flu we couldn’t get out of bed, much less participate in a family dinner. We decided Someone was trying to tell us something, so no more goose on the Matile table.

This is also the time of year we remember those Christmases past and the special treats we enjoyed so much. My Aunt Evelyn’s divinity, Grandma Holzhueter’s sugar and molasses cookies, and my mom’s apple and pumpkin pies were all integral parts of Christmas we looked forward to.

The Schwinn Corvette I got for Christmas in 1957 in a cut from Schwinn’s 1956 catalog.

And, of course, there were the presents under the tree. I remember the toy service station I got one year, along with a car transporter truck, loaded with four pastel-colored plastic Hudsons. And, of course, the Christmas when I was seven and got my first Lionel train. Yes, I did get a Red Ryder lever-action carbine when I was 9 or so, and that great red and chrome Schwinn Corvette bike when I was 11 was a beauty. It also taught me, the day I got it, to NEVER do a panic stop with the front wheel caliper brakes while going down our steep gravel driveway.

As the holiday approaches, and with nothing better to do than recover from the persistent cold I’ve had for the past several days, I thought I’d just list a few of my current favorite things, along with some of my pet peeves as 2019 comes to a close. So, with very little further ado, here are a few of my…

When I take my shower every morning, I thank providence for my warming towel bar. The gadget is fixed to the wall in our first floor bath, and gently heats and dries our towels. There is NOTHING better than grabbing a warm towel after exiting the shower.

I’ve carried a pocketknife for decades, starting when I was in grade school. These days, students would probably be either jailed or sent for counseling if they turned up at school with a pocketknife but it was another time back in the ‘50s and ‘60s. To start with, I carried a farmer’s friend pocketknife just like my dad’s. Before he retired in 1964, he sold livestock feed for the Moorman Manufacturing Company of Quincy, IL. The company gave out premiums to farmers for buying their products, and one year around 1958 or so, the premium was a nice four-blade Case pocketknife. I carried that until I discovered Swiss Army Knives back some decades ago. My current Swiss Army version was a Christmas gift from my daughter about 15 years ago. One of my most useful gadgets, I use its knife blade, nail file, and folding scissors just about every day. Less frequently, I use the tiny built-in LED flashlight and retractable ballpoint pen. But its built-in 2gb thumb drive is something I frequently use to carry back-up files around. Clever people, those Swiss knife makers. 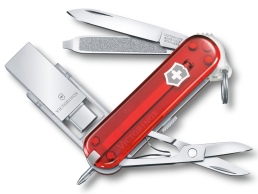 Those of us with ankylosing spondylitis, after our spines finish calcifying, can no longer bend over to pick up errant coins dropped, shoes, or papers. So to deal with the situation, I’ve got my Gopher picker-uppers scattered around the house and out in the garage and in the storage shed. Since they fold, they’re easy to take on trips, too. A related tool I use just about every day is my collapsible shoehorn that lives on a shelf in my closet.

Bob, my partner in crime down at the museum, said the other day how good the gyros were at Arby’s. We hadn’t had gyros for quite awhile—it seemed like the 2008 recession killed off most of the nearby spots that sold them. Generally, we have pizza on Sunday night, but last night we decided to try Arby’s traditional Greek gyros, and were VERY favorably impressed. And at two for $6, the price couldn’t be beaten. Granted, gyros perfectionists may not like Arby’s substitution of flatbread for the traditional pita, but we thought the flatbread was softer and fluffier than pitas, and really tasty. And we really liked Arby’s

As 2019 grinds to a close, as a grumpy old man, I have to include a few of my lingering pet peeves, most of which involve the others I share the road with.

The Matile Manse is located right on the Fox River Trail, a walking, running, and biking trail that extends from Oswego north all the way to the Wisconsin state line. It’s really nice to see so many people using it and seeming to have such a good time doing so. On a warm summer Sunday morning, I swear we see half of Oswego’s population walking, running, or biking on the trail. It’s certainly one of the most heavily used amenities in the Oswegoland area and we owe former Oswegoland Park District Executive Director Bert Gray and environmentalist, naturalist, author, and war hero Dick Young for doing all the deep spadework that made it a reality.

But as the trail passes in front of our house it’s situated right on North Adams Street, meaning all those walkers, runners, and bikers share the trail with cars on North Adams. Since that section of trail is on the street, the rules of the road prevail. That means walkers must walk AGAINST auto traffic and that cyclists must ride WITH the traffic. And, again, I do mean MUST, since it’s the law. It also means walkers and cyclists should NOT split up with half on one side of the street and half on the other side when they meet a vehicle. I usually give kids some leeway with the splitting up part—I remember doing the same dumb thing when I was a kid. But with adults, there’s simply no excuse for this dangerous habit.

Furthermore, North Adams is a dark street with only a few streetlights. Since walkers and cyclists share the street with motor vehicles, it’s extremely dangerous for those walkers and cyclists to be out after dark with no lights or reflective gear, especially if they’re on the WRONG SIDE OF THE ROAD! Several times when we’ve come home on dark, moonless nights we’ll suddenly come upon pedestrians dressed in dark clothing—black hoodies seem favored—with no warning. So my plea is for walkers, runners, and cyclists to please wear some reflective tape or carry one of those neat blinking strobe lights to give a bit of warning to hapless motorists on dark nights. And that goes for those out walking their dogs after dark, too, especially on rainy nights.

So there, my major peeves, new food finds, and favorite gadgets are all laid out just in time for Hanukkah, Christmas, and New Year’s.

Hope you and yours have a very happy winter holiday season and that you’ll stop by in 2020 to enjoy more local history!