November is Native American Heritage Month, fitting because of the history behind the celebration of the Thanksgiving holiday. After all, if not for the help of Native Americans, the Pilgrim Fathers probably would have starved to death after only a few years.

Unfortunately, the President, apparently still harboring a grudge against Native Americans because of casino deals gone bad and reportedly at the behest of rich Republican donors, decided to proclaim November as “National American History and Founders Month.” Fortunately, though, there’s been no noticeable effect. Major museums and organizations are still commemorating the month that honors the people who greeted those first Europeans when they stepped ashore.

These days, the long occupation of the Fox River Valley by Native People is only dimly recalled through the names of places, geographical features, roads, and buildings. The story of what happened to those first residents of our region of northern Illinois begins with the arrival of the first European explorers.

Jolliet and Marquette explored the Illinois River Valley in 1673 and found the related tribes of the Illinois Confederacy living here.

In 1673, the governor of New France, which included Canada and much of the northern U.S. west of the Appalachian Mountains, commissioned an exploration expedition of the Mississippi River watershed. Rumor had it that the Mississippi ran southwesterly, possibly to the Pacific Ocean, meaning it could provide a water highway to the Pacific Ocean. Those speculations proved untrue, but the expedition’s leaders, geographer Louis Jolliet and Jesuit missionary Father Jacques Marquette, did leave us the first written descriptions of central Illinois.

From those accounts and others, we know that at that time Illinois was occupied by the six main tribal groups comprising the Illinois Confederation. Calling themselves the Illiniwek (which meant “the men”) and “Illinois” by the French, the Kaskaskia, Cahokia, Michigamea, Peoria, Moingwena, and Tamaroa, primarily made their summer homes along the Illinois River, which was named for them. The confederacy’s family groups used Kendall County and other areas along the Illinois’ tributaries as hunting grounds and winter quarters.

Beginning about 1660, the Iroquois Confederacy, whose home was in upstate New York, began a series of military campaigns all the way west into Illinois in a quest to seize control of the lucrative trade in furs—primarily beaver pelts—with the Europeans. Although sometimes playing both sides against each other, in general the Iroquois favored the British while the tribes of Algonquian stock living in the western Great Lakes were allied with the French.

LaSalle and Tonti established a trade fort atop Starved Rock where the Fox River joins the Illinois, drawing several thousand Native Americans to the area for protection against their enemies.

The turmoil, called the Beaver Wars by historians, drove the Illinois west of the Mississippi for several years and they had probably just returned in 1673 when Marquette and Joliet encountered them. Then in September 1680, the Iroquois attacked again, crushing the Illiniwek in a series of battles.

By 1683, the constant Iroquois threat to French economic interests led adventurer, entrepreneur, and explorer Robert Cavelier de laSalle to fortify Starved Rock and gather several thousand Indians to that vicinity for mutual protection. A 1684 map shows the Fox Valley occupied by a number of Indian groups connected by trade and security understandings with LaSalle’s Starved Rock venture. After the area’s resources were exhausted some years later, LaSalle’s principal lieutenant, Henri de Tonti, abandoned Starved Rock, and relocated the entire fur trading and regional security operation south to Lake Peoria. Eventually, most of the French moved even farther south to Kaskaskia and Cahokia along the Mississippi in southern Illinois. With that move went the remnant of the Illiniwek, creating a strategic vacuum in the Fox Valley.

The culturally related Fox, Mascouten, and Kickapoo tribes unsuccessfully attempted to occupy the region following the French war of extermination waged against the Fox in the 1720s and 1730s, and the Fox Valley was again considered part of the Illinois’ domain. However, in 1746, interrelated bands of the Pottawatomi, Ottawa, and Chippewa tribes—who called themselves the Three Fires Confederacy—began to move into northern Illinois from their homes in Michigan, Indiana, and Wisconsin. They were being pushed west by other tribes who were, in an ethnic and economic chain reaction, trying to escape further depredations of the grimly efficient Iroquois.

Gradually, the Three Fires pushed out the other tribes then attempting to claim northern Illinois. Since the last Illinois bands had been eliminated from the Fox Valley for several years, the Three Fires claimed the area as their own.

During the French and Indian War of the early 1760s, the Three Fires continued their long-time support of the French. Even after the British won the war, the Pottawatomi remained loyal to their French friends. They killed several British fur traders and participated in the western tribes’ attempt to force the British back west of the Appalachian Mountains in the brief war called Pontiac’s Rebellion. 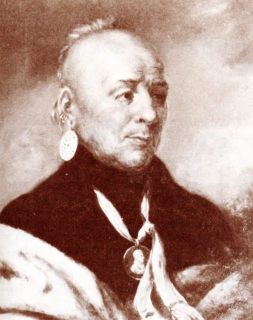 Waubonsee was one of the principal war chiefs of the Three Fires Confederacy. His village was located along the Fox River between Oswego and Batavia.

By the time of the Revolutionary War, however, the Three Fires had transferred their loyalty to the British, and fought against the Americans, who had begun to encroach on territory the tribes considered their own. Three Fires villages located up and down the Fox River also supported the British during the War of 1812, with many of them taking part in the destruction of Ft. Dearborn—now Chicago—in 1812. That year, according to U.S. Indian Agent Thomas Forsyth, the Three Fires could muster some 600 warriors. Forsyth reported that year that Chiefs Waubonsee and Main Poche both had villages located on the Fox River from where war parties participated in raids and battles against the Americans.

After the War of 1812 solidified the United States’ hold on the Illinois Country, the Three Fires tried to protect through diplomacy what they had failed to protect through military action. They were, however, unsuccessful in this, and were forced into a number of key land cessions during the next two decades.

President Thomas Jefferson had established a policy in 1803 for the removal of Indians to lands west of the Mississippi River to open land between the Appalachians and the Mississippi River for settlement. In 1830 the policy became law with passage of the Indian Removal Act, which was strongly supported by the southern states and by President Andrew Jackson.

In the aftermath of the brief Winnebago War of 1827 and the much more serious Black Hawk War of 1832, Illinois settlers clamored for the removal of all the native tribes from the state. In spite of the Three Fires’ general support for the U.S. during both upheavals the Winnebago and Black Hawk wars, the U.S. government readily agreed with the sentiment of the settlers who were trying to establish new homes and the land speculators who were eager to make profits.

President Andrew Jackson championed the removal of Native People from the area east of the Mississippi. While the “Trail of Tears” suffered by the Five Civilized Tribes is the best-known of the removals, the tribulations of the Three Fires Confederacy were just as harrowing.

In the fall of 1835, under orders from the federal government, the first large group of the Three Fires left from near Chicago and were removed to a region in northwestern Missouri called the Platte Country or the Platte Purchase. Two years later, the rest of the Fox Valley bands of the Three Fires were sent west in October, traveling through near continual rain and mud, across the Mississippi at Quincy before arriving in the Platte Country in mid-November. While the infamous “Trail of Tears” suffered by the Five Civilized Tribes (Cherokee, Chickasaw, Choctaw, Creek, and Seminole) is the best known story of the disasters suffered through the Indian removal policy, the removals of Native People from northern Illinois were just as brutal.

But by the time the Three Fires arrived in the Platte Country, settlers had already started to filter into the area. So the tired and bedraggled Three Fires people were almost immediately forced by the U.S. Army to move farther west onto the shortgrass prairie near Council Bluffs in what would soon become western Iowa. It was wholly unfamiliar country for them and they strongly disliked due to its lack of timber, not to mention the arrival, again, of increasing numbers of white settlers.

So finally, in late 1837, they were removed one last time to what was hoped would be their final home on the Marais des Cygnes River in Kansas. And so it proved to be.

Despite strong government pressure, some Three Fires families had refused to move. After seeing the lands they were assigned in Iowa and farther west, others who had moved slowly drifted back to Illinois, only to be rounded up by the government and sent back again. The last of the Fox Valley’s Indian residents weren’t permanently moved west until 1838.

And that finally brought the Native American presence in the area to a close after 120 centuries of continuous habitation along the banks of the Fox River, something it might be worthwhile to think about as we observe Native American Heritage Month.