It is unlikely that any one person or any single event, at least since the huge influx of new settlers during the “Year of the Early Spring” of 1830-1831, changed Kendall County more than did Don L. Dise.

Dise, 77 at the time, died 20 years ago this month at his home on Grand Cayman Island in the Caribbean. 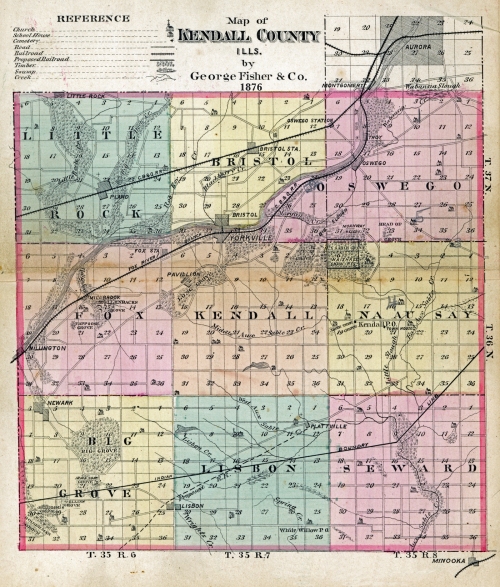 Like Lewis B. Judson and Levi F. Arnold, who laid out Oswego, Kendall County’s first town, Dise was a visionary who aimed to create a town with single-family homes, apartments, schools, churches, and stores along the banks of the Fox River—and to make his fortune while doing it. But unlike Oswego’s two 19th Century town builders, Dise built his urban vision starting in the mid-1950s.

Kendall County was first settled by American pioneers in the late 1820s, but it took nearly a decade for the first town to be platted. Immediately after Judson and Arnold mapped out their new town on the east bank of the Fox River in 1835, other villages were laid out throughout Kendall County. Yorkville, Newark, Bristol, Millington, Plattville, Pavilion, and Little Rock followed Oswego, and in the 1850s, the county’s newest town, Plano, was laid out along the new right-of-way of the Chicago Burlington & Quincy Railroad west of the Fox River. 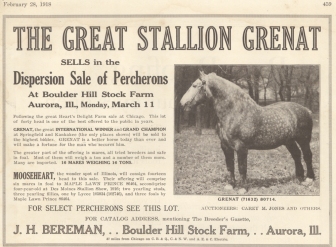 Over the succeeding years, towns came and went. Bristol Station was established at a stop on the railroad a couple miles north of today’s Yorkville on the CB&Q’s main line. Millbrook was also laid out along the rail line. Oswego Station was established a few miles west of Oswego, but a town never grew up around it like one did at Bristol Station. Pavilion, once one of the county’s fastest growing towns, withered after the railroad bypassed it and it eventually completely disappeared. Busy Little Rock, on the heavily-traveled Chicago to Galena Road, never grew, also because of its distance from the rail line, the same fate that befell the stagecoach trail hamlet of Plattville.

After the 1850s, no new towns were founded in Kendall County—until Don L. Dise decided to follow the lead of post-World War II homebuilders in New York and Pennsylvania who developed the concept of entirely new urban communities plunked down in formerly rural areas. The Levittown concept was developed by William Levitt, who created Levittown, Pennsylvania and Levittown, New York. Created to satisfy the desire for new housing by returning American military personnel following World War II, the Levittowns were self-contained with their own paved, winding streets; affordable homes, churches, schools, and stores. 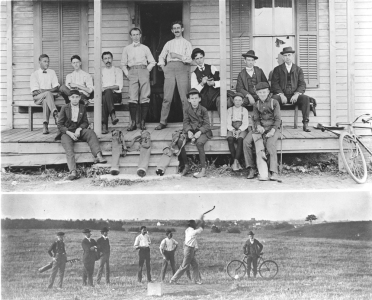 The Aurora Golf Club, located at what is today’s Boulder Hill Subdivision. The top photo was taken on what became the A.C. Hyde House on Briarcliff Road. (Little White School Museum collection)

It’s entirely likely that Dise, a Pennsylvania native, was well aware what Levitt was creating and so decided to try his luck doing the same thing out here on the Illinois prairie.

He found a likely spot on the 716 acres then remaining of the old Bereman family farm they’d named Boulder Hill Stock Farm, located along Ill. Route 25 just south of Montgomery. J.H. Bereman had made his millions selling freckle bleaching cream to Victorian ladies, and used some of the money he earned to buy more than 1,000 acres of Oswego Township farmland in the early years of the century. Bereman raised crops, but he was better-known for the blooded Percheron draft horses he bred and raised.

In 1901, investors tried to establish the area’s first golf course on about 50 acres of the property, using one of the farm homes as the clubhouse. It wasn’t a bad idea since Riverview Park, an amusement park that drew people from all over the area via the interurban trolley line that ran along the park’s border, was located just across the river. But the course’s location proved too far south of Aurora’s population in the days before reliable, cheap autos, and that course was abandoned in 1907, the investors moving the course north, where it eventually became the Aurora Country Club. 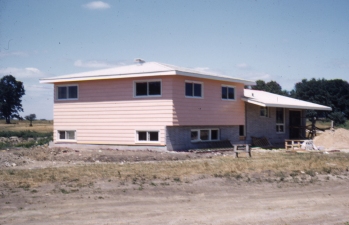 Bev and Ruth Skaggs bought the first house in Boulder Hill at 22 Bereman Road. They moved in in the fall of 1956. (Little White School Museum Collection)

In the early 1950s, Dise learned Caterpillar, Inc. was planning to build a large manufacturing plant in Oswego Township across the river from the Bereman farm, and also that Western Electric, the manufacturing arm of AT&T, was planning to open their new Montgomery Works in a former munitions plant and wallpaper factory on the west bank of the Fox directly opposite the Bereman farm.

In addition to the obvious need for housing for thousands of new workers at the two huge new factories, the young veterans of World War II were hungry for housing, and the biggest government aid projects in history outside of the war itself—the various GI Bills—were supplying a flood of cash to send the vets to college and help buy them new tract homes. 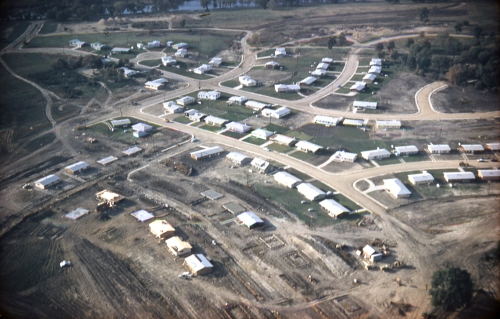 By 1957, as this aerial view looking west towards the Fox River illustrates, Boulder Hill’s outlines were beginning to become visible. Paved streets with curbs, gutters, and sidewalks were creating an urban profile on the Illinois prairie. (Little White School Museum Collection)

So Dise took the plunge. Assembling a group of investors, they bought the Bereman farm in 1955. His sales director, A.C. Hyde decided to live in one of the Bereman farm homes—the former golf course clubhouse as it turned out—which still stands today on Bereman Road in Boulder Hill. Meanwhile, Dise and his family occupied the sprawling Bereman mansion on the bluff overlooking the Fox River just to the north of his new housing development.

Construction crews broke ground in the spring of 1956, and the first of the model homes were begun. The first home in the new development was sold to Bev and Ruth Skaggs in May of that same year. Bev worked at Lyon Metal Products in Montgomery and the new subdivision would be a perfect location for his family, he later recalled. The model homes were opened to the public in September of 1956 and by the end of the year 11 families were living in the new development—including the Hyde and Dise families. 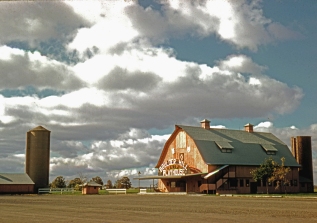 Dise created a unique ammenity by converting one of the Boulder Hill Stock Farm’s huge barns into the Boulder Hill Playhouse, a community stock theatre with a unique revolving stage. Opening in 1958, it was destroyed by arson in 1967. (Little White School Museum Collection)

From there, construction accelerated. By 1958, 100 homes were occupied in Boulder Hill, and the planned development was well on its way to becoming the largest community in Kendall County until booming Oswego surpassed it in 1997. As proposed by the planning firm of Carl Gardner & Associates, Boulder Hill was to have homes, apartments, churches, schools, parks, and businesses. And, eventually, it did.

Early on, Boulder Hill residents continued the World War II-era tradition of joining social groups to create a vigorous civic atmosphere. The Boulder Hill Sports and Social Club, the Boulder Hill Antique Study Group, the Hilltop Garden Club, and the Boulder Hill Civic Association were all established by the subdivision’s early residents to maintain civic pride and grow community spirit. Although he never really said so, Dise probably figured the largely self-contained subdivision would eventually incorporate and become a real town, but that never happened. That has remained one of Boulder Hill’s biggest problems. Without a municipal government, its services are badly fragmented. Municipal water is supplied by Montgomery, police protection comes via the Kendall County Sheriff’s Department in Yorkville, schools from the Oswego School District, parks from the Oswegoland Park District, street maintenance from Oswego Township, sanitary service from the Fox Metro Water Reclamation District, and building and zoning enforcement from Kendall County government in Yorkville. Mailing addresses are Montgomery, with that village’s 60538 ZIP Code. 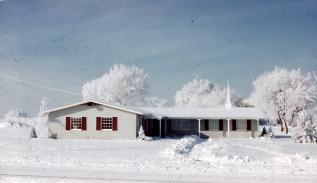 Incorporated or not, Dise’s development had a huge impact on the Oswego-Montgomery area, especially the Oswego School District. In the fall of 1955, 775 students in grades 1-12 were enrolled in Oswego’s schools—there was no kindergarten at that time. Five years later, the district’s enrollment had nearly doubled to 1,399 on the first day of classes and classrooms were bulging. By 1970, the enrollment had more than doubled to 3,441.

But Dise did help by eventually providing two new school sites in his development. Boulder Hill Elementary School opened in the fall of 1961 and Long Beach School in 1968. He also contributed $100 for each home built in the subdivision to help the school district out, the first such developer contribution in Kendall County’s history. 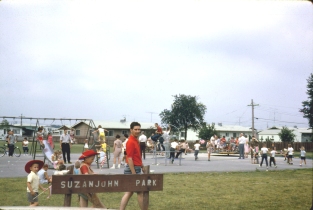 SuzanJohn Park on Hampton Road in Boulder Hill was the first park the Oswegoland Park District owned. Donated by Dise, it was dedicated on Aug. 18, 1960. (Little White School Museum Collection)

Also in 1960, Dise donated the one-acre Suzan-John Park on Hampton Road to the Oswegoland Park District. The neighborhood park was the first real estate owned by the park district, which now owns and maintains 995 acres of parks, trails, natural areas, and buildings. The small neighborhood park was named after Suzanne Dise, Dise’s daughter, and John Hyde, son of Boulder Hill Realtor A.C. Hyde. Both Suzanne and John had died in childhood.

When he started construction on Boulder Hill 64 years ago, it’s unlikely Don L. Dise realized he was beginning as profound a change in Kendall County’s character as was experienced during the period of settlement and town building of the 1830s. Boulder Hill was only the start of the urbanization of our once almost entirely rural county, a trend that continues today, and after the downturn in the late 2000s is beginning once again to accelerate.