Cheap or thrifty? You be the judge…

My family was barely middle class and far from rich. But my mother and my grandmother both knew how to make things look nice and very middle classy.

My mom’s family were all Germans, some more recently from the Old Country than others. In 1885, her father’s family immigrated from East Prussia. They had been employed on one of the Kaiser’s estates, where my great-grandfather had been a gardener. Her mother’s family, on the other hand, had arrived here in 1750, settling in Pennsylvania and becoming one of the Pennsylvania Dutch families that lived in and around Lancaster County. They emigrated to Illinois in 1852, nearly a century after they arrived here in the New World. 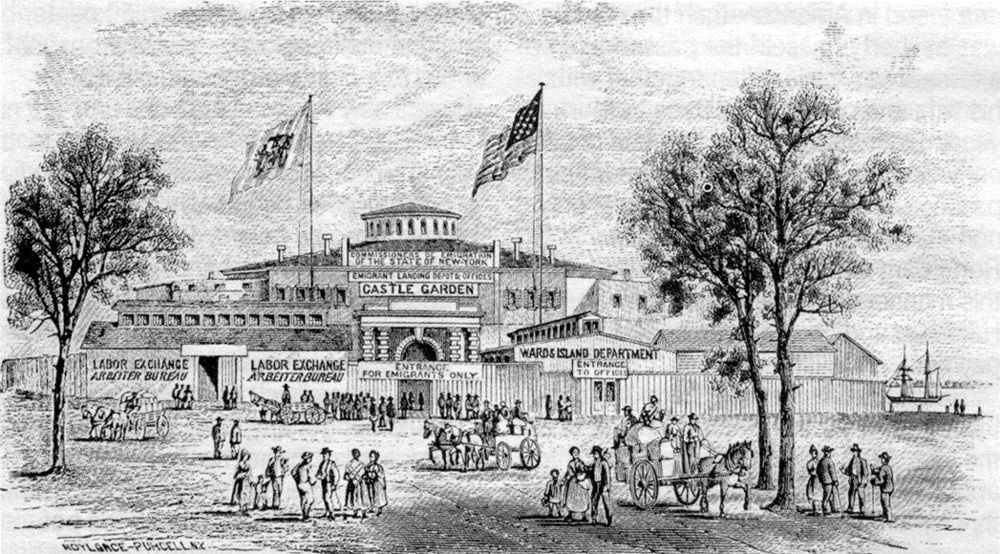 Castle Garden in New York harbor was the original point of entry for immigrants before Ellis Island opened. It welcomed immigrants from 1820 to 1892.

Even though Grandma’s family had been in North America for a century, they still spoke German at home, so they mixed easily with the new German immigrants that had begun arriving in Illinois in the 1840s. My grandfather’s family were relatively late arrivals, although not so late they got here by the time Ellis Island was the main European immigrants’ processing center. Instead, they came through Castle Garden, Ellis Island’s predecessor, and then traveled west to Aurora, Illinois to join my great-grandmother’s family as part of the chain migration cycle that modern right wing politicians decry.

They were thrifty, hard workers, those German and Pennsylvania Dutch ancestors of mine. They knew how to hang onto a dollar so tightly that, as the song says, the eagle on it grinned.

My mother said they were tight. My sisters said they were so tight they squeaked. My grandmother calmly explained to be once, “Well, that’s just the way we did.”

The rule was to hang onto what you had, make do, make it last, fix it if you need to, and keep using it until it was unusable. Even my teacher (of English descent) at our one-room rural school was part of the infrastructure that pounded thrift into us. “Waste not, want not” was her favorite saying. Because thrift was the thing back then for all of us, something left over from the Great Depression of the 1930s and the wartime rationing of the 1940s.

The Lantz family farmhouse in 1894. Left to right are my great-grandmother, Amelia Minnich Lantz, my great-aunt, Edith Lantz, and my grandmother, Mabel Lantz.

For instance, when we moved to town after my dad retired from farming in 1954, I was introduced to student banking. Every week my third grade classmates would put a few coins in small brown envelopes that were sent off to the bank where we had our very own savings accounts. There was a lot of peer pressure to participate in student banking back then.

My mother ran a very thrifty household, but her mother seemed to think she was awfully liberal with her spending. For instance, my mother absolutely hated stale bread. Her one vice was to retire a loaf of bread as soon as it became even slightly stale. Not that she threw it away, of course. Instead, I grew up eating lots of bread pudding. That hit two birds with one stone, it prevented us from throwing out perfectly good bread and it provided dessert, with which no meal in my household was complete.

My grandmother was even thriftier than my mother. Stale bread was good bread as far as she was concerned. Moldy? Scrape it off and don’t complain. A little mold is probably good for you anyway.

But my grandmother’s parents were, hands down, the winners in the family thrift sweepstakes.

While working on the Watts Cutter house on Main Street in Oswego, Irvin “Irvy” Haines snapped this photo of the crew. Left to right are Dan Minnich, Lew Inman, Haines (note hand blurred when he pulled the cable to snap the shot), and Lou C. Young. (Little White School Museum collection)

To build their new retirement home, they chose my great-grandmother’s nephew, Irvin Haines (the family called him Irvy). Haines was a well-known Oswego contractor who worked, off and on, with a crew of other local carpenters including Lou C. Young, and two of Haines’ cousins, Lew Inman and Dan Minnich.

What they chose to have Haines build for them was a Queen Anne-style, story-and-a-half farmhouse design. Haines must have liked the design; he built at least three of them, including the one for my great-grandparents, one in neighboring Montgomery, Illinois, and one on a farm just outside of Oswego on Collins Road.

It was an interesting design, and relatively advanced for the period. On the exterior, it had clapboard siding that was wider on the first floor that narrowed on the second floor, drawing the eye up to the steeply-pitched roof making it look larger and taller than it actually was. Shingles and brackets in the peak provided a bit of interest, as did Greek Revival-like columns at the corners and which provided support for the front porch with its steep stairs. It was finished off with a fireproof lifetime roof of fiber-reinforced concrete shingles as protection against cinders and ash produced by the Chicago, Burlington & Quincy locomotives that puffed through the backyard on the CB&Q’s Fox River Line. When they advertised them as lifetime shingles, they weren’t kidding. They’re still on the house and they’re still in great shape.

The Queen Anne house Irvy Haines finished for his Aunt Amelia and Uncle John Peter Lantz in 1907 Note how the varying widths of clapboard siding draw the eye up towards the steep peak of the roof..

Inside, the home was fashionably dressed with long-leaf yellow pine woodwork throughout, including the tall kitchen cabinet, and built-in cabinets in the dining room and back parlor. The kitchen got a birdseye maple floor, while the rest of the house was floored with the same yellow pine used for the woodwork. It also included closets in each of the three upstairs bedrooms and a coat closet near the front door, relatively rare amenities that were rapidly gaining in popularity at the time. Also installed was a modern acetylene gas lighting system, powered by an acetylene gas generator in the basement.

But the biggest modern feature of the house was the indoor bathroom. Their farmhouse had never had such a modern thing, and it was something to behold with its white porcelain toilet and sink and its claw-foot cast iron tub.

My great-grandparents celebrating their 70th wedding anniversary in the house Irvy Haines built for them in Oswego, Illinois

It was a grand house and an upgrade from their farmhouse, but the thing in their minds as they moved into town in October 1907 seems to have been resale. After all, while they were healthy they were definitely getting on in years and who knew how long they’d live. So they decided it would be too easy to wear out this wonderful house young Irvy Haines built for them. So they had him add a full kitchen in the basement where they could spend most of their time, and made sure he included an outhouse at the end of the sidewalk in back of their combination town barn and chicken house so they didn’t wear out the nice modern kitchen and bathroom upstairs.

It was an interesting plan and sensible, I guess, from their point of view. The problem was, however, that they didn’t live there for 10 years and die. Instead, they lived in the house for more than 30 years and it finally got to the point that resale value was about the last thing they worried about as they celebrated their 73rd anniversary there, still cooking in the basement and using the outhouse so as not to wear out their nice kitchen and bathroom.

The long-leaf yellow pine woodwork in my great-grandparents’ house is still in good shape after more than 110 years.

Ownership of the house devolved to my grandmother after her parents’ death. My aunt and uncle lived there during World War II, moving up into Oswego proper in the early 1950s. The house was available when my parents moved off the farm, so they bought it from my grandparents. My wife and I bought it from my mother in 1976 and owned it until we moved across the street last year. My son lives there now with his family, the fifth generation of our family to enjoy it. His son asked him if he has to live there when he grows up, and he was assured it would be a strictly voluntary thing.

The living-in-the-basement thing ended when my aunt and uncle move there in 1943. When my parents moved there, my mother did some remodeling in keeping with the 1950s, ‘modernizing’ it by removing the yellow pine plate rail in the dining room, the picture rails in the living and dining rooms, and the cornices on the door frames, so it’s not quite as elegant as it was when Irvy Haines wrapped up construction back in ’08.

But I like to think that our family’s recycling the home that’s been going on for the past four generations sort of reflects the ethos of my great-grandparents that you don’t get rid of something just because it isn’t new and further that you take good care of what your have and make it last as long as you can. So, while none of us have lived in the basement, and while the old outhouse has gone the way of the rest of that breed, we’re still maintaining the old homestead just as we’ve done for the past 112 years. And with the care and skill Irvy Haines used when he built the place, it’s not impossible it will still be standing tall when my grandson’s grandchildren wonder about its history.