Our government: Know it, live it, love it

Saw a piece over on Jonathan Turley’s blog reporting that 64 percent of Americans can’t identify the three branches of government.

Does that seem as odd to you as it does to me? Ever since the U.S. Constitution and the Bill of Rights were approved by the people of the several states, state and federal governments have been working hard to educate the citizens about their own government. Granted, those efforts have flagged recently—and if you believe that survey Jon Turley quoted, they’ve flagged considerably—but early in the country’s history, educating folks about their government was a priority.

That’s why local newspapers could be mailed free early in the country’s history, with the goal being to make sure the voters were actually informed about the issues of the day. Which is also why all those post offices popped up all over the country, closely following the frontier as it moved west, and also why those stagecoach lines got government subsidies to carry mail and passengers.

The idea led to establishing public education. The goal was partly to improve the people’s education, but it was more to create an informed electorate. Around my area of northern Illinois, the earliest schools established by pioneer families were subscription schools, funded by the private subscriptions of the parents of school-age children. Public funding of schools didn’t really start until state law allowed levying property taxes to finance public schools in 1850.

Way back when I was in high school a century after that, the idea behind teaching public school students still included creating an informed electorate. Which is why the U.S. History course our junior year of high school hit the constitutions of both the U.S. and Illinois so hard.

Our teacher that year drummed a major idea into our heads. To understand the U.S. Government (and to get through college social studies when the time came), we needed to know three fundamental U.S. Supreme Court cases: Marbury vs. Madison, Munn vs. Illinois, and McCullough vs. Maryland. The ideas those three cases introduced into our government were so fundamental that he insisted on quizzing us on them the rest of the year.

And he was right. Those three cases really formed the basis for much of how our system of government has evolved. Because despite what people like Antonin Scalia seem to believe, the U.S. Constitution really is an ever-evolving document, not something monolithic or static. After all, after the Constitution was adopted by the states, what’s the first thing the framers did? They amended it. Ten times. And thank goodness for their foresight.

So what, exactly, do those three Supreme Court decisions say, and why are they so important? Thought you’d never ask. Here’s a brief rundown for those of you who did not take U.S. History from Gerner Anderson back in 1963.

1. Marbury vs. Madison: John Adams was in a snit. He’d just been beaten in the race for President in 1800, so he wouldn’t be serving a second term. Not only that, but he was beaten by Thomas Jefferson, whose Democrat-Republican political philosophy was 180 degrees removed from Adams’ Federalism. In order to preserve Federalist power, Adams appointed, on his last day in office, 82 federal judges, all of whom were Federalists. This gang of “Midnight Judges,” as the pro-Jefferson press dubbed them, were rightly seen by Jefferson as a backdoor way of imposing Federalist policies on his administration for decades to come. As a result, Jefferson ordered his Secretary of State, James Madison, to hold the official commissions of some of the judges in question, one of which was William Marbury. Marbury proceeded directly to the U.S. Supreme Court and applied for an order directing Madison to deliver his judicial commission. 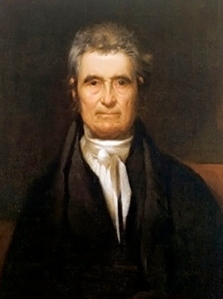 Chief Justice John Marshall knew a political hot potato when he saw one, and he realized he had to act with care in order to both do the right thing and maintain the integrity and the authority of the Supreme Court. There was a danger that Madison and Jefferson would simply refuse to comply if Marshall ordered them to comply with the Judiciary Act of 1789 and deliver Marbury’s commission. So instead, Marshall looked at the act itself, and determined it was in violation of the Constitution because it forced the intrusion of the judicial branch into the prerogatives of the executive branch. The result of Marshall’s decision was to establish the principle of judicial review, which to this day confers on the Supreme Court the responsibility of determining which legislative acts are constitutional. And, it involved all three of those branches of government that most Americans are apparently ignorant of.

James W. McCullough was in charge of the newly opened Baltimore branch of the Second Bank of the United States, and he refused to pay the tax. A private citizen sued the Federal bank in Maryland court, charging McCullough with non-payment of taxes—and also angling for the substantial reward Maryland law allowed for finding banks not in compliance. The argument was that the U.S. Constitution did not specifically mention banks and therefore was not allowed to participate in banking and therefore that the Second Bank of the United States was unconstitutional. Maryland’s courts agreed, and the matter was then appealed to the U.S. Supreme Court.

The court overturned the state court’s decision, and in what became one of the most important decisions for our form of government, Chief Justice Marshall ruled that, first, the Constitution’s Section 8, Clause 18, the “Necessary and Proper Clause,” gave the Federal government all the power it needed to establish a bank, even though banking is never mentioned in the Constitution itself. Second, Marshall wrote, the states do not have any special sovereignty because they approved the Constitution. That’s because, Marshall wrote, the people, not the states, ratified the Constitution. Third, Marshall found Maryland’s attempt to tax the Federal government unconstitutional, famously writing that “the power to tax involves the power to destroy,” which was what Maryland was trying to do to the Second Bank of the United States.

According to the Library of Congress, this illustration shows some of the grain elevators on the Chicago River controlled by Ira Munn.

3. Munn vs. Illinois: The 1870s were a volatile time in the Midwest. The financial Panic of 1873 was seriously affecting farmers. In addition, powerful railroads were brutally squeezing the region’s farmers, charging exorbitant and unfair fees to ship grain to market and to ship coal into communities who needed it to heat their homes and power steam engines for factories and farms. Farmers joined together, forming associations including Grange lodges and other groups, to fight against what they considered economic tyranny. In response, powered by a progressive surge led by farmers and workers, the Illinois General Assembly passed legislation allowing the state to set the maximum rates railroads could charge to ship grain and that grain elevators could charge to store it.

Chicago grain merchant Ira Munn sued on behalf of grain combines and the railroads, contending government didn’t have the power to meddle in commercial activities—which, come to think of it, doesn’t sound much different from the arguments plutocrats are still making to this day.

When the case reached the U.S. Supreme Court in 1877, however, Chief Justice Morrison R. Waite, writing for a 7-2 majority, ruled that government does have a legitimate interest in regulating commercial activities that affect the public interest. Further, the decision allowed for the regulation of interstate commerce as a legitimate function of the Federal government, opening the way for such agencies as the Food and Drug Administration and the Environmental Protection Agency.

I’ve often wondered if our march towards plutocracy might have been different if Antonin Scalia, Clarence Thomas, and Samuel Alito had had Gerner Anderson for U.S. History when they were in high school. I’m guessing probably not, because there seems to be a problem among the right wing doing the right thing coupled with doing what’s best for the most people, which amounts to almost a genetic predisposition to attack those perceived to be weak. But we should thank our lucky stars that John Marshall and Morrison Waite were on the court when they were instead of those three. Otherwise, we’d be living in a very different America today.